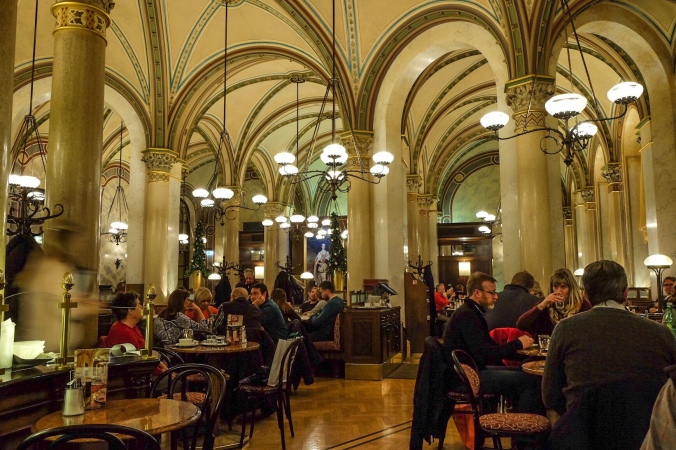 The legends that seek to explain Austria’s introduction to coffee read a bit like film scripts, and while I’m not sure what the truth is, I love the stories.

It happened because of a Turkish invasion, by many accounts. The fleeing Turkish military left behind bags of mysterious coffee beans, and the Habsburgs weren’t sure what to do with it. An officer named Kulczycki was told to discover it’s use, and after some experimentation, he ended up opening the first coffee house in Vienna.

According to a different explanation, an Armenian spy named Diodato was the first to open a coffeehouse in Vienna, bringing the knowledge from his homeland.

By either account, coffee didn’t appear in Austria gradually, but in a specific year – 1683. At the end of the 17th century, Austria became one of the first European countries to embrace coffee drinking after Italy and England.

In the early 1800s, Napoleon’s blockade of the city increased the price of coffee beans to such an extent that this favorite drink of the Austrians became nearly unattainable. Coffeehouses turned into cafe-restaurants, and that has been the norm since.

While women were banned until 1856, it wasn’t until the end of the 19th century that the ‘Kaffehaus’ truly came into its own anyway. Coffee house culture was a defining part of the early 1900s in Vienna, with writers and painters frequenting favorite cafes to work and engage with others in their field. This ideal of creative intellectuals making themselves at home in the coffee house is one that Austrian’s have tried to hold onto since, and that atmosphere is what makes the spaces so special today.

Artists and writers aside, the public in general considered coffeehouses to be ‘extended living rooms’ used for socializing outside of their small Vienna apartments. Following WWI, they were used as a space for locals to meet up and exchange desired and hard to find goods in a time of scarcity.

While the Viennese coffeehouse faced a time of decline in the 1950s that lasted until the 1980s (Italian espresso bars gained in popularity while the coffee house was seen as an old fashioned and outdated space), they have recently re-gained in popularity. So much so that in 2011, UNESCO named Viennese coffee house culture on their National Agency for the Intangible Culture Heritage list.

The etiquette in all Austrian coffee shops is a wonderfully unique mix of formal and laid-back. Waiters wear dinner jackets and bring you coffee served on a silver tray, next to a glass of water and often a chocolate. There is a strong visual focus, with artwork adorning the walls, but there is also an obvious concern with comfort. Almost every space has old-fashioned newspaper racks, and it’s socially acceptable (even encouraged) for people to stay all day, as long as you order a coffee when you arrive. There are often card games or pool tables in the space, making the coffee shop an even more apparent extension of home.

Kleiner Brauner and Großer Brauner: Meaning ‘little brown one’ or ‘large brown one’, this is basically plain steamed coffee with a bit of milk.

Melange: Equivalent to a cappuccino – frothed milk and coffee.

Eiskaffee: One of the many decadent options – iced coffee with vanilla ice cream, chocolate, and whipped cream. 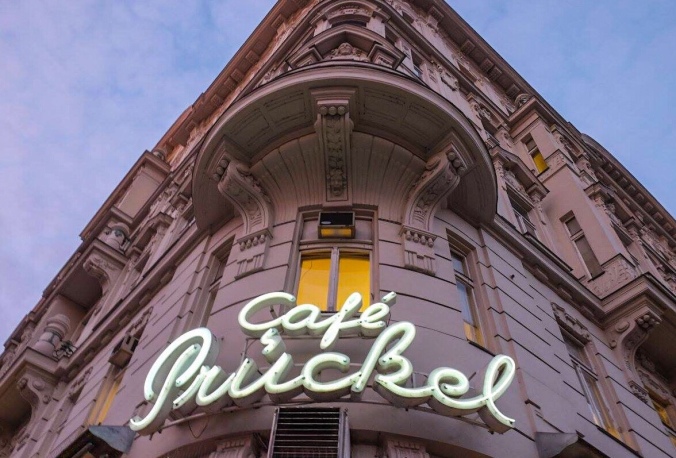 Each coffeeshop has it’s own distinctive atmosphere and has attracted differed groups throughout history because of that. For example, at the end of the 19th century, writers frequented Café Griensteidl, Café Herrenhof, and Café Central, while Café Museum was a space for painters.

Opened in 1876, the beautiful pastries at Cafe Central are as luxurious and extravagant as the space itself. The high arched ceilings would be more expected in a ballroom than a coffeeshop. Known for it’s many famous patrons over the years – including Freud, Trotsky, and Lenin – Cafe Central still attracts a crowd.

Opened just before WWII by a husband and wife, they were forced to close a year later when Leopold Hawelka was drafted and sent to the Soviet front. He survived the war and re-opened Hawelka in 1945. This was not the easiest time to be a business owner – Leopold used to walk for two hours to collect wood from the forest in the mornings, and clients who could not afford a drink would sit all day with a glass of water, enjoying the warmth.

In the 1950s, Hawelka became known as a popular spot for writers, who used the space as an office, while local painters hung their art on the walls (usually as payment).

The space has maintained a cozy and personal atmosphere, with Leopold welcoming every visitor personally until he passed away – it’s now run by his son and grandsons.

Opened in 1899, Cafe Museum has a much more understated design than many of the others on this list. Famous Vienna artists Klimt and Schiele were regulars, as was the architect Otto Wagner.

Decorated in the style of the 1950s, Cafe Pruckel is a very traditional Viennese coffee house – spacious with comfortable seating, and large chandeliers hanging from the ceiling. On certain days of the week, special programs are offered, such as piano music, recitals or literature readings.

Located in the Hotel Sacher. Not only one of the best hotels in the world, their cafe is also classic Vienna, and known for serving the quintessential Sachertorte (a rich chocolate cake with apricot filling).