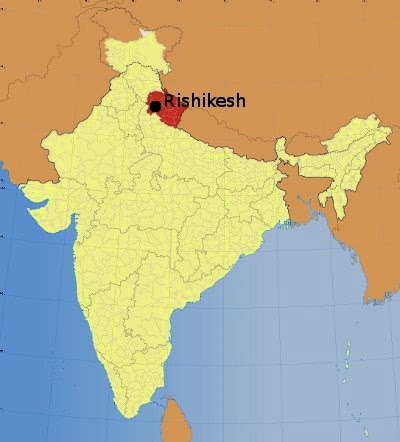 The birthplace of yoga, Rishikesh is a city built along the shores of a beautifully green Ganges.

Its most distinguishing feature besides the river itself is the numerous ashrams scattered throughout which attract hoards of Western hippies to this peaceful mountain region. It’s quite the destination for those searching for tranquillity and spiritual instruction. Or for people who want to hang out and watch monkeys, like we did. There were lots of monkeys.

We showed up exhausted after a 14 hour bus ride, throughout which my mother decided it was her responsibility to stay awake with her eyes firmly fixed on the back of the drivers head just in case he dared make any careless manoeuvres. The first thing we did was head to our guesthouse’s balcony for a reviving breakfast. Then I had my first shower in three months which didn’t run out of hot water within a few minutes and which I could enter with bare feet and laid down to rest on a bed with real pillows. It was one of the best moments of my life. 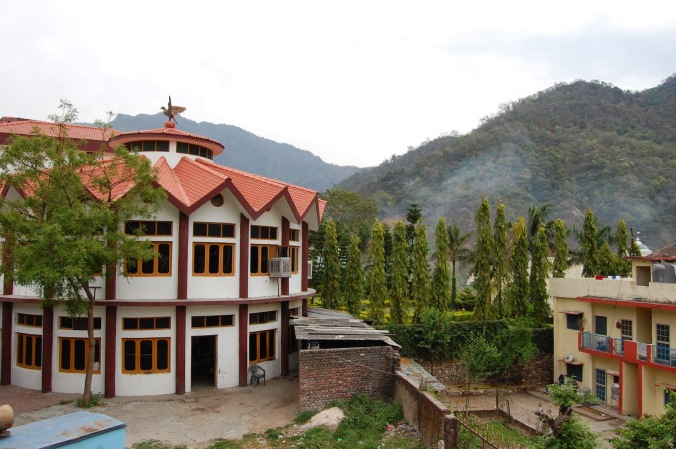 A short walk down the road, past a man dressed as Hanuman, the monkey god, and we appeared at the Ganges – a river known as Mother Ganga and held sacred by Hindus, making many of the cities along its shore sites of pilgrimage. As we reached the stairs leading down to the water we were surprised by how impressively green and powerful the water was, making us think for a split second that somehow we’d turned the corner and appeared in Verona. Any illusions that we’d entered a romantic Italian city immediately vanished, however, as soon as we stepped onto the crowded bridge which shook all too perceptibly with every step and which was serving as playground to a dozen monkeys. On the other side of the river there was one particularly imposing temple and several nearby ashrams. We browsed through the many shops aimed at tourists and walked past numerous cafes offering relaxation and a pleasant view, while street vendors tried to sell us postcards or powder-bindi kits (which we may or may not have bought…). 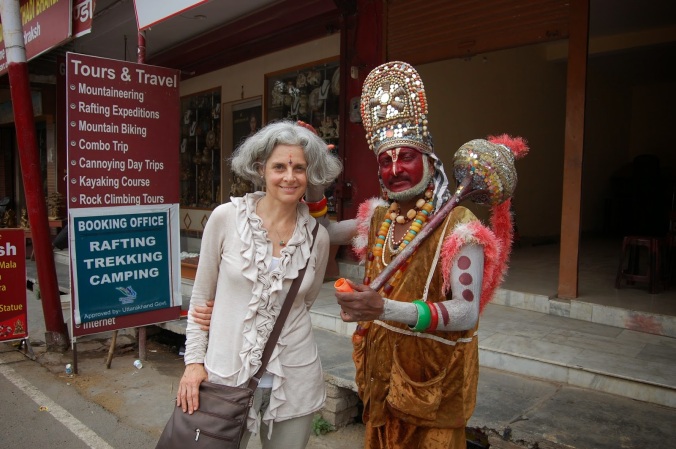 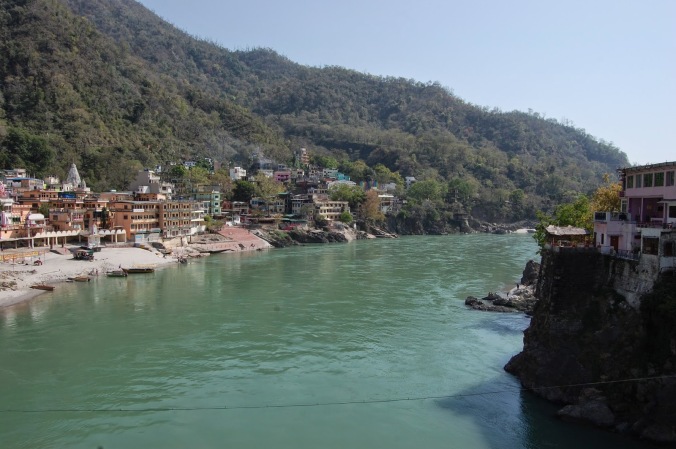 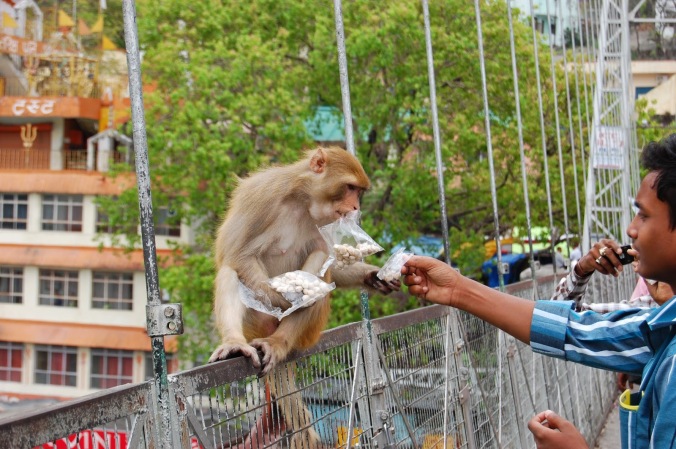 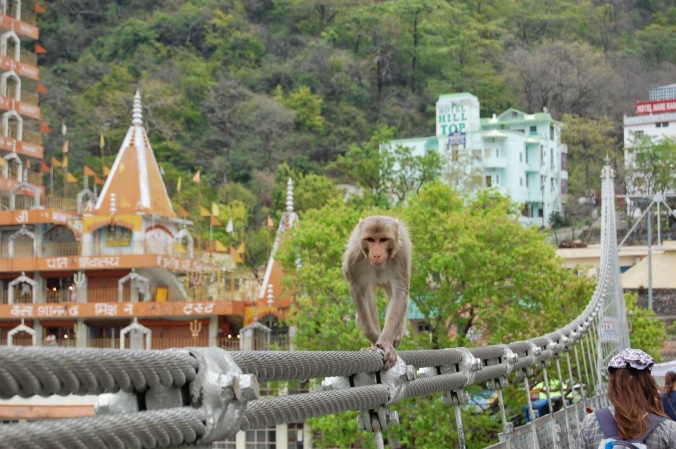 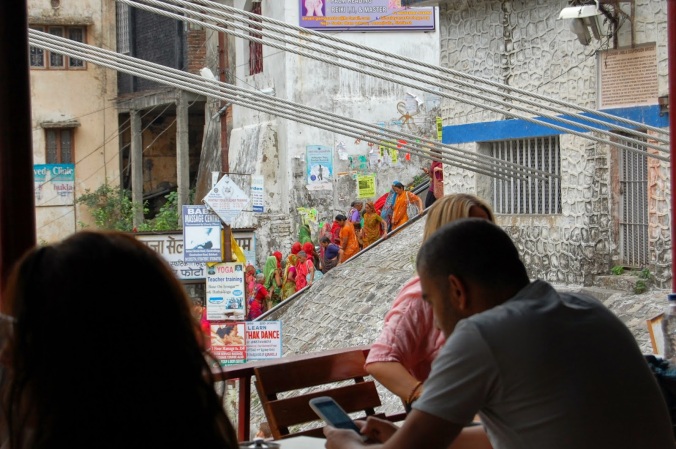 Back at our hotel we asked the English owner of our guesthouse what we needed to do with just one day in Rishikesh. She sent us to the evening aarti down by the river, a half an hour walk from where we’d been that afternoon. An aarti is a worship ritual during which songs of prayer are sung while lamps are lit in order to offer light to the gods. The name comes from the word “Aratrika” which means “removes dark (ratri)”, and it is a crucial part of almost every Hindu ceremony. So we set out early to get some food first and ended up at a little place down by the water. The abundance of flies diminished the atmosphere slightly but the food was very good. 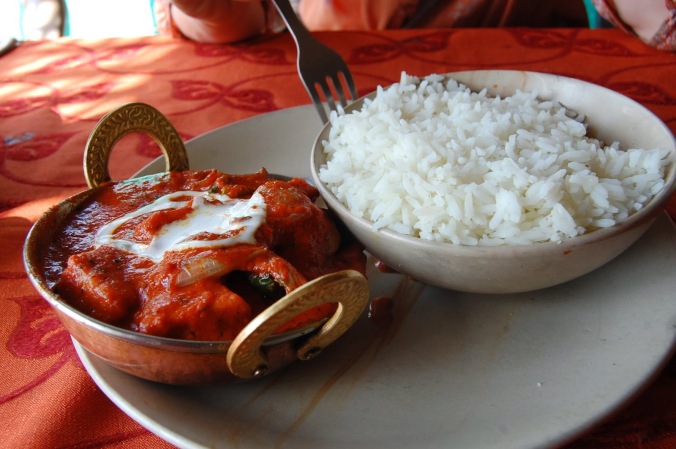 Then we took a long, meandering walk down to the area where the main aarti takes place – Parmath Niketan – along a lovely riverside path. For the final half of our journey we were joined by an extremely friendly Indian man who approached us trying to sell drums and then, realising we weren’t just a tough sell but genuinely didn’t want one, he settled for conversation. We still showed up too early for the sunset ceremony and spent some time in an ashram garden, happy to find some shade. As soon as the gates opened, we chose to sit on the steps closest to the river, dipping our feet into the cool water while watching the place slowly fill up. It was pleasantly less touristy than we had expected as the vast majority of the visitors seemed to be there for spiritual reasons rather than curiosity. Throughout the entire ceremony you could see how passionately invested so many were and how sincerely they joined in with the prayer.

One of the young boys in yellow leading the aarti was playing an instrument and singing the prayer. His voice was one of the most beautifully clear and pure sounds I’ve ever heard, and while we, of course, didn’t know exactly what was being chanted, the even and repetitive singing was entrancing. It also served as a beautiful backdrop to the entire scene as we sat there, feet in the Ganges, witnesses to the emotions of the crowd: faces around us expressed by turns enthusiastic pleasure, calm enjoyment, and focused devotion.

Then H.H. Pujya Swami Chidanand Saraswatiji Maharaj (luckily for his friends, he goes by a shorter version: Pujya Swamiji) came down into the crowd and joined with some other VIPs to light a fire and say some prayers, all of which I’m sure were very significant but I can’t say I knew what was going on. It turns out he’s quite the famous holy man with an assortment of accolades listed on his website. (We talked to someone later in our journeys about this aarti and he expressed disapproval of Pujya Swamiji as he didn’t believe that it was appropriate for holy men to become so embroiled in politics.) At this point some kind of lecture started during which many people began to leave and we decided to head out as well before the sun finished setting. After we left the aarti concluded with the iconic offering of light to the Gods in thanks for the light they provided all day long. However, we were happy to head back to our comfortable guesthouse and, as we saw the same process in Varanasi a few nights later, I don’t feel much regret for leaving early. 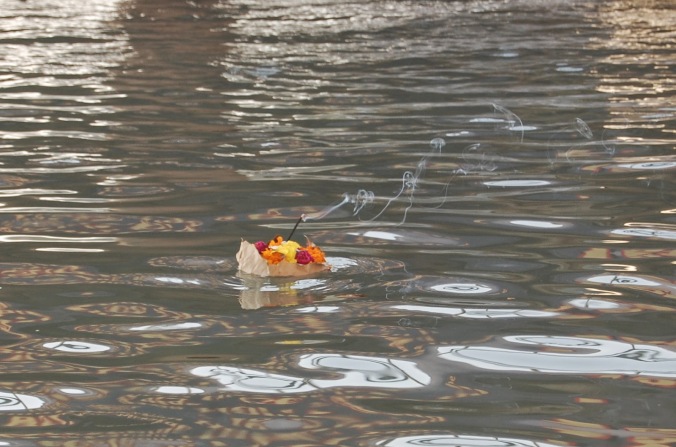 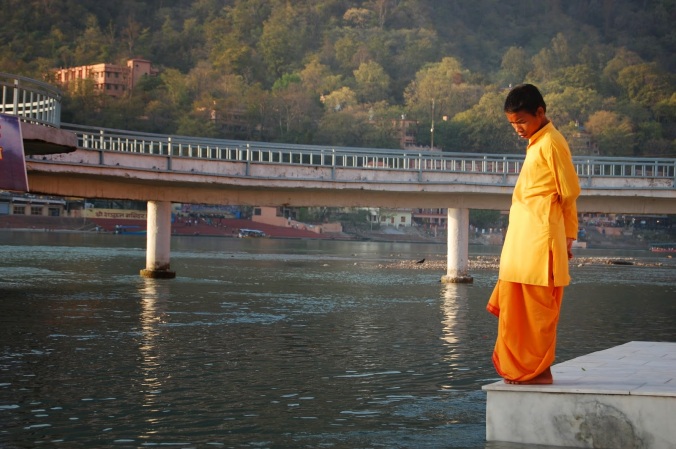 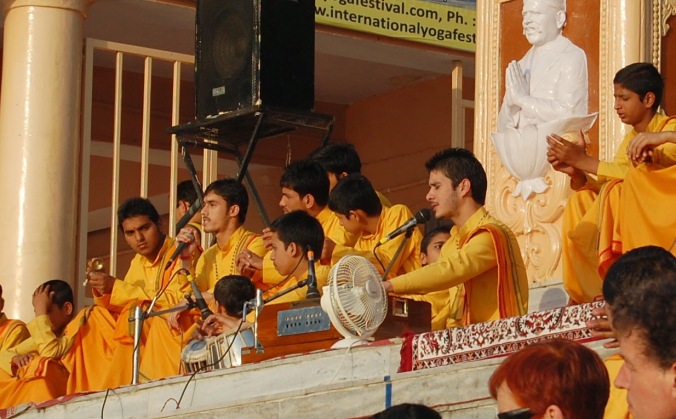 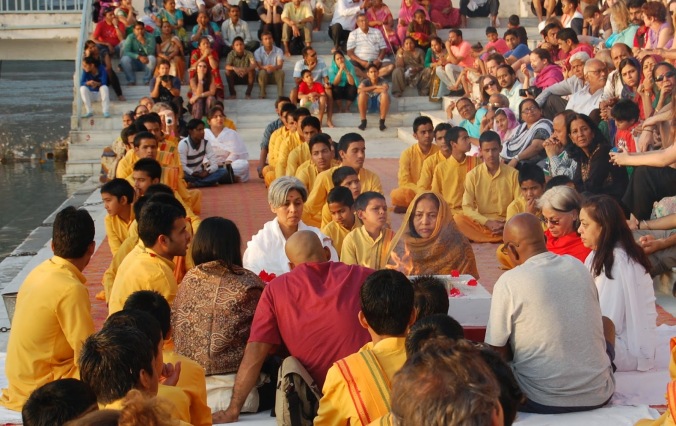 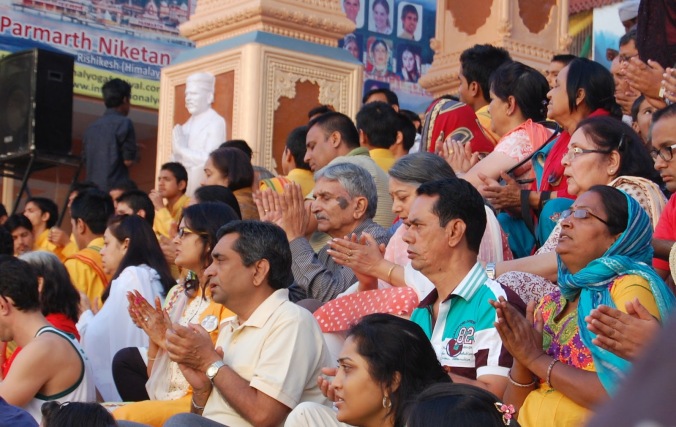 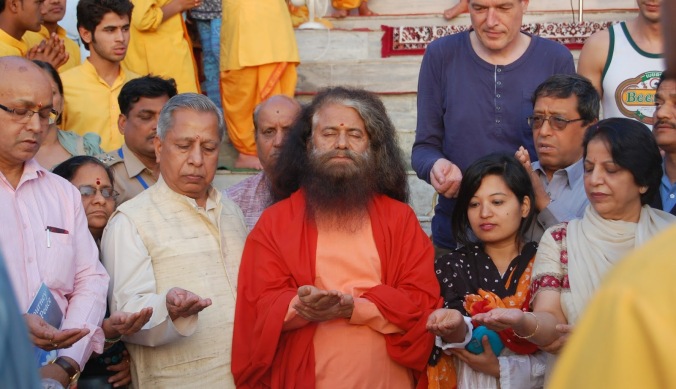 The next morning our time in Rishikesh had already come to an end. After breakfast we decided that there was little point in hanging around longer since we had an hour’s drive to our train station in Haridwar and chose to get there early in order to see a bit of this sister city before we left the area. Turned out this was a pretty ignorant idea as there was no way we could wander around and see anything in just a few hours, but we had quite the adventure nonetheless.

On the ride over my mother expressed an interest in the red thread bracelet on our taxi drivers wrist and he explained that it was blessed and that the god Hanuman would protect the wearer from harm and bring them good fortune. We quite liked this idea, so he stopped the taxi on a side street and bought us some. Perched in the front seat of his taxi in front of the train station, he held the string up to a makeshift altar on his dashboard while saying a prayer and then continued to pray as he wrapped them around our wrists. So now the deal is that we’ll be protected as long as we don’t remove them but let them eventually fall off on their own.

Then we got to experience an Indian train station for the first time. Like everything else, it seemed to function in a unique state of organised disorder. We stored our bags in their locker after much confusion about the process, including me running around the station trying to buy the cheapest ticket possible since ours was technically from another station and therefore not valid at the storage room. There were people sitting on the floor all over the station and we decided to temporarily escape the crowds by heading out into the streets… (ha!). We entered one of the first restaurants we found with quite low expectations. It was a chain specialising in dosas and the image on the door was a cartoon of what looked like an Italian chef, but surprisingly we then had one of the best meals I’ve had in India – a vegetarian thali (basically a tasting platter with lots of little dishes) which I’d seen many times on menus but this was the first one I’d ordered. 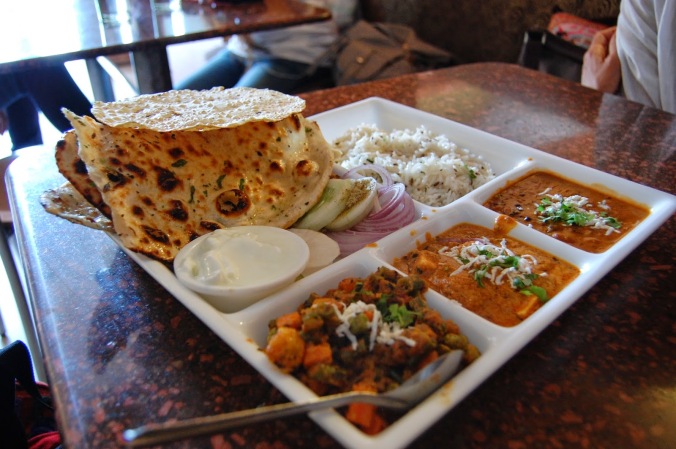 As we finished up, we saw some commotion outside and went to investigate. There was a political rally going down the street in support of the lotus party and its candidate, Modi. Most people we talked to while in India stated that they planned on voting for Modi if they were going to vote at all. Others claimed that there was no good choice as everyone was corrupt and that Indian politics was the same as it had always been; lots of promises and no intentions to follow through. 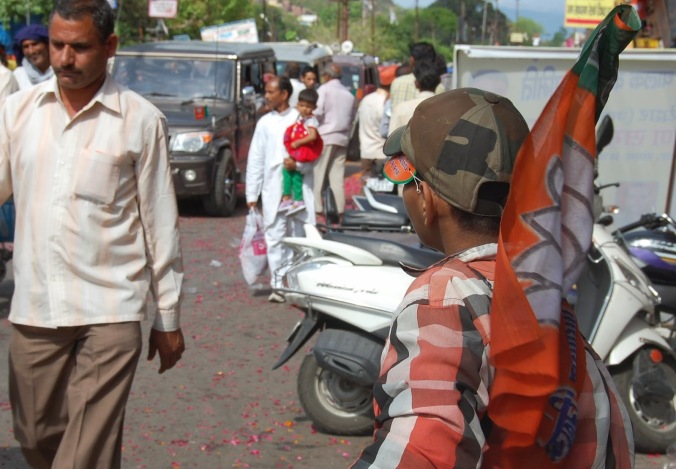 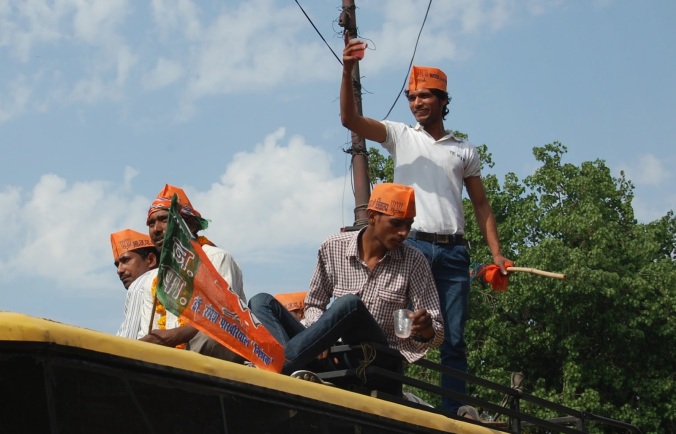 It was clear that there was nothing we could do with just two hours left to kill so back it was to the train station for us. We picked up our bags so that they could serve as seats and sat on the main platform watching all the life around us. Monkeys ran back and forth above our heads, which was charming until the man next to me showed a deep gash in his arm from when a monkey had bitten him five days earlier. That combined with the line of people who started forming eager to have their pictures taken with us drove us a bit further down the platform.

We watched as those without reserved seats in the more expensive coaches shoved themselves into the luggage carriages where they would have to stand for the duration of their journey. Quite a few leapt into doorways as the train was moving, hanging on from there or sitting on the stairs. Space certainly isn’t left unused in India. There was one family arriving by train who seemed to be moving house – the three or four children and two adults kept jumping back into the train to collect more packages, bedframes, and chairs and passing them onto the platform before they loaded up every person and walked out of the station. 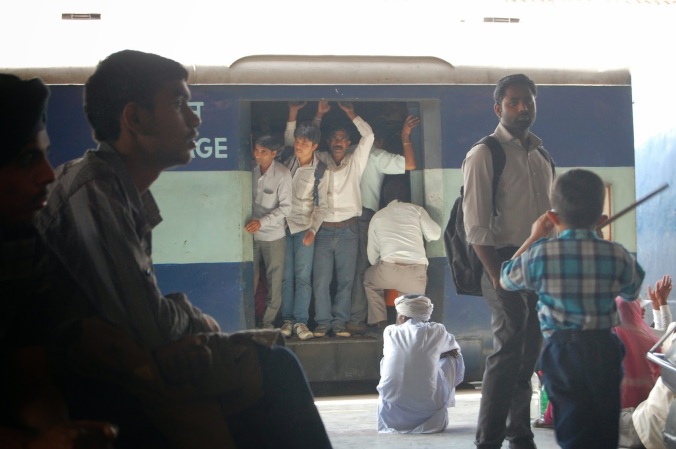 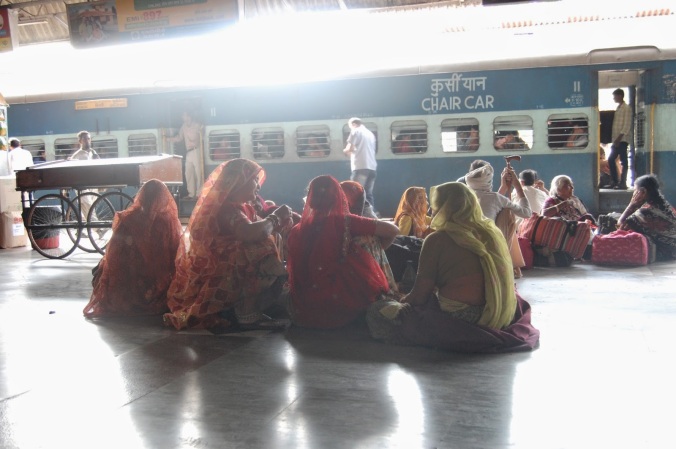 Finally our train pulled in (but on time!) and it turns out the reserved seating area is lovely. They just kept bringing us food. First it was a snack, then a meal, then tea, then dessert… It went on and on and highly efficiently. It was only 5 or so hours and then we were in New Delhi ready for a night of rest before our flight to Varanasi!