One of the nice things about celebrating Holi was that it gave me an excuse to go back to Delhi and see the city through less jet-lagged eyes.
Getting to Delhi involved typical India-travel struggles. As it was both the day before Holi and the Dalai Lama was in McLeod Ganj, the town was of course bursting with tourists and we had to speed walk part of the way to the bus station since the streets were too crowded for taxis. We were told that our bus was actually half an hour later than what we’d previously been told and a certain bus behind was repeatedly pointed out as being the one going to Delhi. And then 40 minutes later we were informed that, no, our bus was at the original time and had left ages ago. We had to catch it in Dharamsala. Of course by the time we made it we had missed the bus but eventually got onto another after many debates with the man working there about whether there were seats and whether we’d have to pay again – so we set of several hours late and mentally exhausted, but the important thing was that we wouldn’t miss Holi.

After a crazy day in Pahar Ganj ‘playing’ Holi, we got to unwind on rooftop cafes drinking coffee. The crowded streets of this neighbourhood were instantly more charming when observed from this safe distance, with the abrasive sounds of traffic and vendors pleasantly muted.

It was an early night for all of us in Delhi as many people were feeling ill – unsurprising given how much coloured powder we probably all swallowed during the course of the day, on top of the general pollution, heat stress and overwhelming crowds that come with walking around Delhi. We’re used to clean mountain air and quiet country roads up here in Naddi so just about every time anyone goes to Delhi they come ill.

But luckily I was feeling okay and the next morning, those of us still up and running (3 of us in total!) walked down the main road in Pahar Ganj which leads straight to the metro. This was my first metro experience in Delhi. After walking through security to get into the building we wait in a long line to purchase our travel tokens – little plastic coins you use to get through the gates. Then the lines separate by gender and you go through security once again – this time more thoroughly as the first one felt incredibly ineffective. Waiting for the metro itself, as girls we walked all the way down to where the first carriage would be to stand under the “women only” sign, pleasantly decorated with flowers to emphasise that this area was for females. While getting into the station was hectic and crowded, the car itself was really pleasant and it seems like a thoroughly efficient system.

We got out in Old Delhi and took our first of many rickshaws that day to the largest mosque not just in the city, but in India – Jama Masjid. It was built in the 1600s by the same emperor who oversaw the construction of the Taj Mahal and of the Red Fort. Any camera or camera phone brought into the mosque has to be paid for, so no pictures of the interior this time around I’m afraid. It was a very spacious courtyard with impressive, tall towers and domes making up the main part of the building. It felt peaceful walking around barefoot and in the robes provided at the gates, surrounded by beautiful Mughal-era Islamic architecture. This made it all the more shocking when people took time from admiring this structure to turn around and take pictures of me – the Western tourist.

From there we went searching for the spice market of Old Delhi. Which took slightly longer than expected because whenever we asked anyone for help they just pointed in what turned out to be entirely  arbitrary directions. We finally gave up and took a rickshaw. Since there were three of us and these were technically 2-person vehicles we had to take turns sitting in the little luggage rack at the back, which was quite the bumpy, uncomfortable ride, but made for a cool view of the streets we were riding through. In Old Delhi streets are separated based on what they’re selling, so we passed a road exclusively for stationary – mainly wedding cards – and a street full of shops selling wedding outfits. We even walked through one area where all you could see was store after store filled with car parts. The spice market was once again filled with vendors all selling exactly the same thing and, as we weren’t actually buying on this trip, after the first few it became quite redundant. And then we were stuck in Old Delhi and it was hectic and parts quite unpleasant and there didn’t seem to be anywhere to eat besides street stalls so we went back to the, at this point, comforting  familiarity of Pahar Ganj. 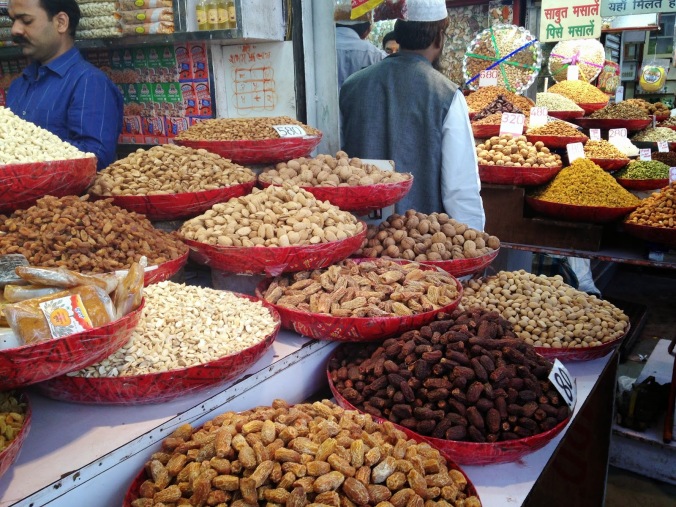 I had a bus back that evening which I had booked the day before in one of the many travel centres in the area. I was supposed to show up at this small road-side office a few minutes before my bus was scheduled to depart and they would tell me what to do from there… I showed up a bit early and spent the entire time trying desperately to read, acting oblivious to the sketchy Indian-Sopranos style transactions taking place around me.

When I first sat down there was this guy from Afghanistan there trying to exchange his currency. The man behind the desk had a friend hanging out with him who suddenly brought up how there had been this other guy from Afghanistan who had recently been arrested for trying to cross the border with a huge amount of gold. They moved onto other topics and then this guy brought up the gold again… And then said, “You know, it’s a bad idea to bring in that kind of gold”. Silence again and then “But you know, if you had any gold… We would give you good price. We could help you out”. The first man protested that he didn’t have any and he’d really like to just get some rupees and they all nod and start counting out bills and then: “It doesn’t need to be a lot of gold, not an illegal amount. Just if you had a bit…” Clearly this didn’t go anywhere but then they started arguing over exchange rates and when the man finally gave in and took what they were offering, he got up and left and the two guys in the ‘office’ starting laughing like they’d just totally ripped this stupid tourist off.

And then for 20 minutes various, massive piles of different currencies were counted out and handed over to or exchanged with various colleagues who stopped in for a few minutes at a time. There was some guy outside too who would come running whenever he was called, and the whole time I’m there observing this bewildering behavior getting more and more anxious that there is no bus and that I’ve just paid this guy a lot of rupees which are going straight into his pocket. But half an hour late some man showed up asking for anyone going to Dharamsala and I ended up following him around the city picking up others along the way and finally getting to what I assumed was the bus stop. But of course it wasn’t. We were an hour later than I had planned on leaving at this point and he piles us all into rickshaws and we set off across Delhi to god knows where. For a while I thought maybe this was how we were getting back to Dharamsala. The rickshaw driver certainly didn’t know where  we were going either because all of the sudden our rickshaw is separated from the others and he’s wandering around a heavily guarded area asking men with guns where the place is he’s supposed to be taking us. We turn onto a busy highway when we spot our group across the two heavy lines of traffic. We inform our driver and he just swerves right into traffic, cutting horizontally across all of it to get us to the other side of the road. Not that he needed to rush because now we wait for 2 hours for the bus to show. At least I had a good book and it was a pleasant evening, and when the bus did show it was quite luxurious – large, comfortable seats with blankets and water provided and I had a whole row  to myself. The Bollywood film even had English subtitles!

It was a rushed trip. Most of the time I took off for Holi I spent on buses, but that’s the sacrifice you have to make to see things here in India. Transportation will take up time, it will probably not go smoothly, and it will be an adventure. But why go so far away from home to have everything be the same!