A week into our life here in Naddi, it was time for all the new interns to travel to Dharamsala in order to register with the police.

Apparently the rules regarding who needs to register and who doesn’t changes depending on which employee is working that day, so to play it safe we all made the trip to Dharamsala. Regardless, this was the nearest real Indian city and a place we’d doubtless find ourselves needing to be in in the upcoming months, so it wasn’t a bad idea to get a group tour of the place and figure out the route from Naddi.

Which started with a walk to the nearby Cantt. Usually buses run from Naddi to Dharamsala several times a day, but this particular week they hadn’t been showing up; no discernible reason, they just weren’t there. So it was either taxi down, walk to Dal Lake and tuk-tuk (the auto-rickshaws which are a common mode of transportation around here) down to Cantt, or walk. It was quite a nice day and the walk to Cantt is all downhill, so walk it was.

Down the long stretch of stairs to Dal Lake, then along the main road until you pass the Brigitte Bardot animal shelter (did she start it or is it merely named after her? I don’t know what this is doing in the middle-of-nowhere India, but she is a well-known animal activist, so I guess it’s nice) and down some more stairs to Cantt. As far as I have seen, Cantt is just one street of shops, but it’s convenient location means that shared jeeps and buses stop on the way to Dharamsala or McLeod and as it’s very near Naddi, this makes it a useful place to know about.

As we arrived in the “square” a jeep was already waiting with a few passengers in it. We asked if it was going to Dharamsala and when he nodded and yelled out, “fast!,” I couldn’t tell if it was a promise or a command. Turned out it was both. There were around three of us (we were 9 or 10 total) who hadn’t yet gotten into the jeep when he apparently got tired of waiting and started to slowly pull away. So naturally we jumped into the moving vehicle and launched ourselves into seats as quickly as possible. And then this guy was off. He went speeding around every corner and paused only to pull over and pick more passengers up.
Just when you think that 12 people in a 9 person jeep is pretty crammed, try adding some more! Why not have a stranger sit on you in India? At least it meant that you couldn’t fly across the seats when the jeep went hurtling towards massive potholes in the road. In this part of India, avoiding potholes in fairly useless – our tuk-tuk tried to the other day and he almost crashed into a wall on one side of the road. It’s more a game of choose the pothole when you’re on a stretch with more hole than road.

We made it to Dharamsala in record time according to the one experienced intern who was with us. She’s been here for 8 months and never made it there so quickly.

And to be fair to those other drivers, I wouldn’t be in a rush to get to Dharamsala either. It kind of sucks. Even though I traveled with my nice camera that day, I don’t actually have that many pictures of the city because it’s grimy and unattractive on the whole. There’s a lot of traffic on the main street and then the city itself is just an area for people to go shopping. Which it is good for – there are places to buy kitchen supplies, groceries, fabric and craft supplies… It’s definitely come in handy since we’ve moved into our own place and needed certain household items. 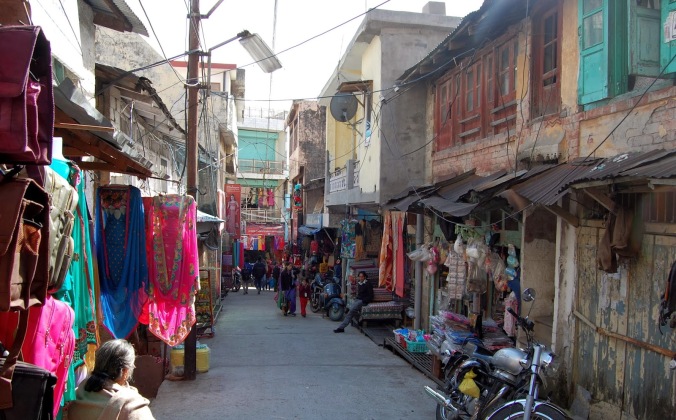 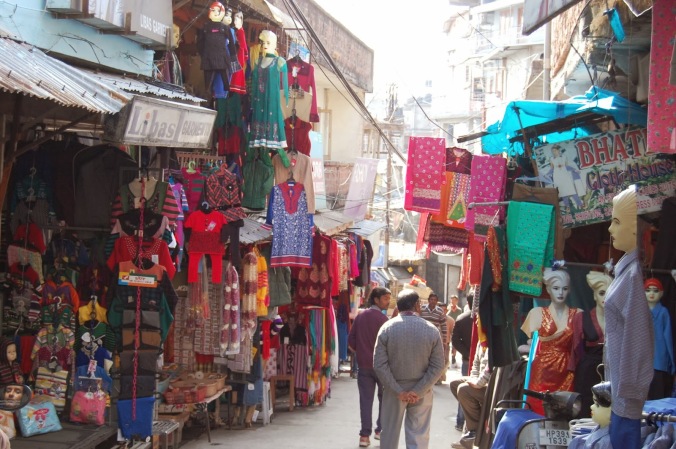 It’s also a pretty good place to go for certain types of Indian food because McLeod is so Tibetan that regional specialties can be difficult to find. In Dharamsala, for example, you can get Chana Puri, a delicious dish of chickpeas, puffed and fried bread, and raw onions. There are also quite a few bakeries where you can get things like jalebi or gulab jamun, or simply a nice selection of biscuits.

The other day we actually discovered a new dish while in Dharamsala! To clarify, I mean one none of the other interns here had heard of – I’d assume the dish existed in India before our arrival… Just off the bus we decided to stop in a tiny Dhaba (a roadside restaurant with local fare) for lunch. We sat at one of three tables and waited for our chai and Chana Puri while everyone else twisted around in their seats to stare at us. And after eating our first course, we decided that we were still hungry enough to split a plate of pakora. A very popular dish in this region, pakora are fried vegetable snacks, although they can also been done with paneer. We’d seen the table in front of us order some and they’d looked quite tasty; plus we were in no rush to leave. So we asked the owner of the Dhaba for pakora, and he repeated to us “bla-bla pakora?” which we confirmed with nods. And then it got weird. He sent out the other man who worked there for something and started mushing together peas and potatoes. Then the second man returned with a loaf of bread… Is this how they bread the pakora at this place? Is this an unrelated dish or the owner’s lunch break? Then he started spreading the potato mixture between the bread until he had two sandwiches which he then fried, put on plates and cut in half. This is bread pakora – the dish we had accidentally ordered when we’d said yes without bothering to figure out that “bla-bla” was “bread”. Oh well, it was more food than we’d bargained for, but basically it’s samosa filling inside a deep-fried sandwich, so I’m not going to complain.

Travelling back from Dharamsala was quite the experience as well. This time three of us caught a bus going to McLeod. It was standing room only by the time we got on which really involves some concentration on these roads if you want to stay upright. I had to wait until a relatively smooth stretch and then quickly shift my backpack to the front to open it and get money out for the collector. While I fished out my wallet, my friend had to actually open it and get the money out because I physically could not let go of the rail in order to participate in any two-handed activities. It was quite a team task. I was also stuck clutching this little newspaper bag filled with sheets of plain white paper which I’d bought for the kids after-school programme and when things got really desperate I ended up holding this bag in my mouth while using both hands to steady myself around tight curves. All while having a laughing fit with the other two girls I was with due to the absurdity of the situation. We got some weird looks. And like the jeep, a full bus doesn’t exist in India – if people are waiting to get on, they will find room.

After a brief stop in McLeod we opted to walk home rather than seek more transportation and it was a welcome change of pace.