My first excursion outside of Naddi was to the nearby McLeod Ganj.

As I already mentioned, this is the official residence of the Dalai Lama and as such it exhibits a unique blend of Tibetan and Indian influences.

But this wasn’t my initial impression: my first trip to McLeod was at night and, emerging from our taxis, we were greeted by neon lights. We were in the main square, the small circular nucleus of the town from which 5 or so streets branch off like the spokes of a wheel. There’s a stand right by the drop-off point selling alcohol since only one or two places in the city sell alcoholic drinks, and when they do it’s only beer. And only Kingfisher beer at that. So it’s BYOB(BPYD) – Bring Your Own Booze (But Pretend You Didn’t). If you want to drink, it’s fine, but we need to all act like it isn’t happening.

The contrasts between McLeod and Naddi are vast; in McLeod the sun sets but people are out – the impressive variety of restaurants are actually being used, while hotel  restaurant after hotel restaurant stands empty but lit up in Naddi, eagerly awaiting the promise of ‘tourist season’.

For just about any need that can’t be met in Naddi we end up heading to McLeod, so I’ve been there quite a few times since my arrival in India. Our big grocery shops happen in McLeod where things come in greater quantity and there’s certainly more variety. One thing that I didn’t expect from buying my own food in India: peanut butter is available in just about every shop. It’s been a major staple of our diets since we’ve been here. Veggies are incredibly cheap but many of the items we buy (pesto, canned tuna, grated cheese) are definitely luxury goods in the local mindset. The one thing we all missed and which is hard to find is cheese. But once again, McLeod is the place to go if you know who to ask. There’s one man who runs a small shop there filled with imported specialties and artisan local goods and if you ask him for cheese you get two options: big or small. What kind of cheese is it? Cow. Those are the options around here – cow or goat. And he usually only has cow. It’s not on display, but if you request cheese he’ll grab some from the refrigerator behind the store counter. It’s really not bad. Not the most flavourful stuff in the world, but it’s rapidly become the most exciting weekly purchase we make. 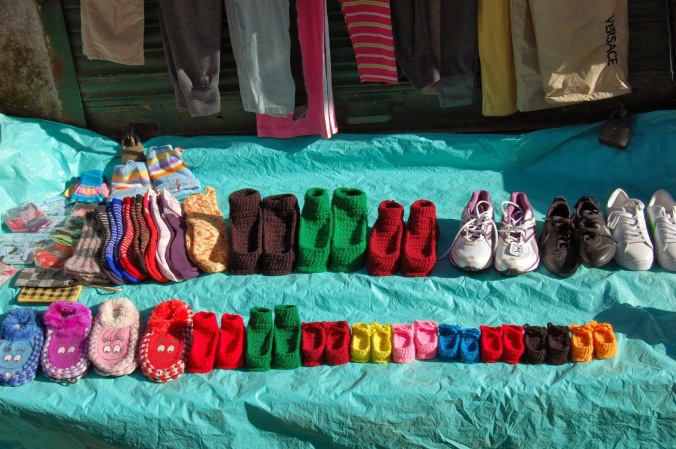 McLeod is the place to go for decent pizza and other Western dishes when you can’t handle one more meal which is centred around lentils and rice. It’s the place to go for warm Tibetan woolen scarves, which, while the fact that they’re sold by everyone with a store or stand suggests that they’re mass-produced, are beautiful and, most importantly, warm.  They’re basically socially-acceptable wearable blankets and I love mine more than most things in this world. I’ve rarely taken it off since I bought it in week one. I wasn’t sure it was the wisest purchase initially as I’ve developed an allergy to wool in the past year, but I’m fairly certain that my body has kindly decided to forgo it’s silly Western allergies for the next few months as it hasn’t bothered me at all. Allergies are a luxury I simply can’t afford while I’m in India. 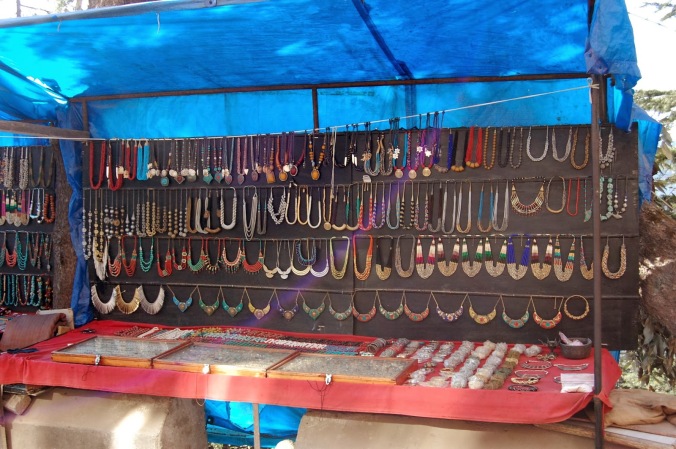 McLeod is also the place to go for Tibetan delicacies, including Tibetan butter tea, which has a distinctive salty and creamy taste as it’s churned in butter. The first time I tried it I wasn’t overly impressed, but I decided to give it another go at a more authentically Tibetan restaurant just a few days ago. It was much more buttery and thoroughly disgusting. However momos (dumplings), another Tibetan specialty, have been pretty consistently delicious. And the veggie burger served in Tibetan bread (basically a very dense bread, kind of like a really intense English muffin) we had for lunch the other day was phenomenal.

And of course, McLeod is the place to go to learn a bit about Tibet, something which can be done in part by a visit to the Dalai Lama’s temple. Situated right at the end of one of the main roads, Tsuglagkhang (the temple) is actually part of a larger complex, with rooms for education and vast and open outdoor areas which I suspect are used for reflection and prayer. The view is spectacular and the whole area is painted a warm and lively shade of yellow which makes the place very inviting and peaceful. There are prayer wheels surrounding the temple; each one must be spun clockwise while you circle them in the same direction. This revolution completes a prayer. Then to enter the temple itself you must remove your shoes and try not to laugh when, after walking around for a few minutes trying to be respectfully silent, your thoughts are interrupted by the monk guarding the temple when he starts chatting away on his cell phone.
It feels like a functioning place of religion rather than a monument to past beliefs like so many places in Europe do. While maybe less awe-inspiring or obviously spectacular, it has a distinctive spiritual feel to it and it’s quite a unique experience seeing the chair from which the Dalai Lama gives his teachings. There are also a lot of Tropicana juice cartons throughout the temple. They’re used structurally in the altars, but I believe the use of food throughout all the displays has something to do with non-monetary donations to the temple. It’s not something I know anything about, to be honest, so I feel I should move on. Basically: worth the visit, really enjoyed it, and it was a great first glimpse at a culture/ religion which is entirely new to me.