One of the most educational and valuable parts of being here in Naddi for the past two months has actually come in an unexpected form: fun club.
While I came to EduCARE to work in microfinance I was asked if I could also help out with the after-school programme once a week in the community we call JDM. I’ve always enjoyed working with kids and it’s nice to have a varied schedule, so I agreed.
The first few classes were challenging. My first week I went to the ASP with another intern who had been running the programme before I got here. He was playing games mainly aimed at improving English skills – things like a counting game, Simon Says using body parts, having one child imitate an animal and the others guess what it is etc.

The next week I took over teaching fun club alone…and dragged a friend along to help. It was pretty unsuccessful. Mostly because – I believe partially due to bad weather – only 5 or 6 children showed up and of these, 2 or 3 of the boys spent most of the time playing outside. The fact that some weeks there are 15 children and some weeks there are 4 makes it difficult to plan activities. After half an hour or so the kids who did show up lost interest and decided it would be more fun to braid hair for the remainder of our time. 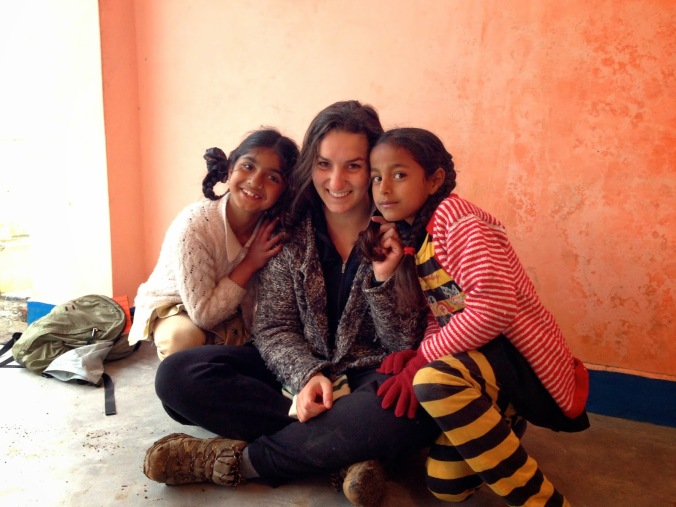 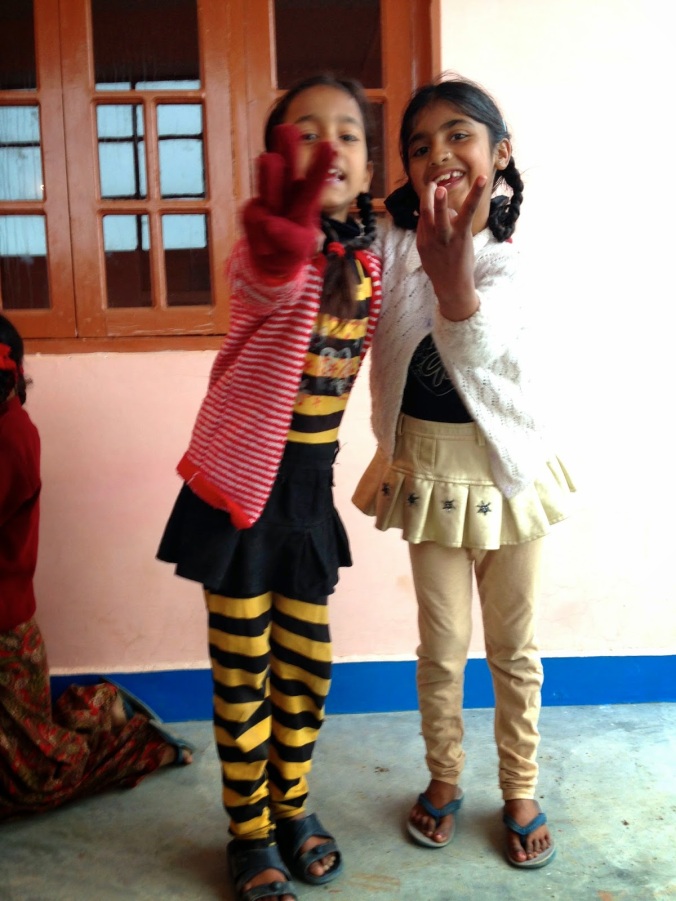 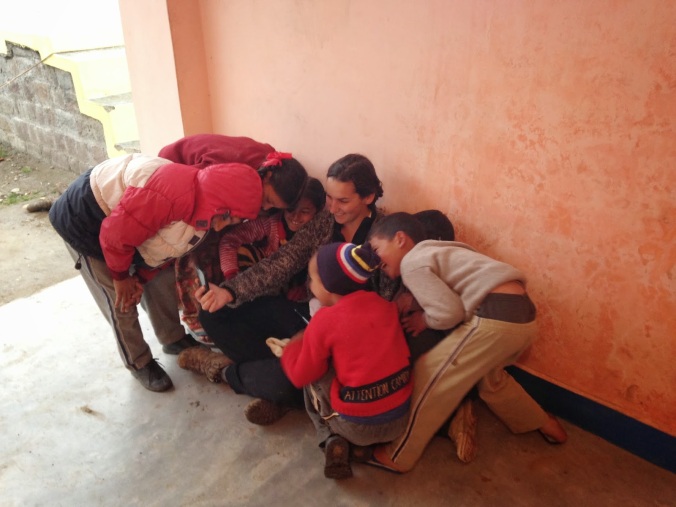 My second solo week there were a lot of kids with a lot of energy. I tried to introduce a few new games using “props” (for example, I drew some simple images on cut-up paper to make cards for a memory game) in the hopes that this would be more attention-grabbing. A few of the kids refused to play the games they knew well already, though, and were incredibly disruptive to everyone else. They were running in and out of class, climbing out the window, locking us in the room and chasing each other around. The class was at least partially salvaged when, towards the end, one of the older girls started writing in my notebook and the ones who were calm and attentive all took turns writing their names and ages, which they seemed to really enjoy.

So it became clear that something had to be done differently. The kids learn English at school and while the older ones get bored by many of the games, the youngest ones aren’t really given a chance to partake. After a few discussions about what this after-school programme was meant to accomplish I came to realise that it’s aimed at offering alternative education from school, so introducing the children to wider issues and concepts such as environmental awareness and gender equality. While these can be difficult subjects to broach with children, it’s also incredibly important that they are given this forum. Taking more of a creative and varied approach would also hold everyone’s attention better, and so while dealing with serious issues some weeks, others would be devoted to crafts or sports – the “fun” side.

First I planned an afternoon where we drew family trees. The kids spent most of the hour working on theirs and then had to present to me who each family member was and their names. It was the first time that we had done something creative since I’d been there and they all seemed to enjoy having time to work individually and got very excited when they saw the paper and markers.

The following week was by far the most interesting one I’ve taught so far. I decided to focus on geography. I bought a map in Dharamsala and then put together a powerpoint of iconic images from around the world. My plan was to have the kids look at the images – things like the Eiffel Tower and the Statue of Liberty – and guess where they were in the world. The next activity I planned was to have the kids name a country starting with every letter of the alphabet. Finally, we would end on a creative note by designing our own flags.

When we started it quickly became clear that they had no conception of any countries outside of India.

For every single image everyone would instantly yell “Delhi!”. “No, not in India”, I would say. Thoughtful frowns all around and then one of them has it – “Rajastan!”.

Then the image of Machu Picchu came up. “Naddi!!” yells one kid.

At last they seem to get the idea that none of these places are in India. Ironically they finally understand this as I get to the slide with the image of the Taj Mahal. They all look at each other, shrug, and one girl says, “well, I don’t know, but I know it isn’t in India”. Oh dear.

However, since after every slide I had the names of the monuments and the countries they were in, the kids could read the names and then try to find them on the map. They seemed to really enjoy this, actually, as they got quite competitive about finding the words.

With the second activity they didn’t know any country names from memory but could once again search the map to find words starting with each letter. By the end of this activity they seemed to be getting bored of finding things on the map and were very ready to move onto something more fun and creative.

I handed out different coloured construction paper I had cut up for all of the kids and told them to design their own flags. I showed some pictures of flags to give them examples and said they could draw whatever they wanted – if they had a country, what would the flag look like?

They all drew the Indian flag. I said that was great, but if they wanted they could turn the page over and draw whatever they wanted – as an example I drew a flag with a tree and some hearts and wrote “Lucy’s flag” underneath. They all turned their papers over and after a few minutes I realised that they were all peaking over at my paper. When I looked at their pictures they had all drawn “Lucy’s flag”… These kids are definitely not familiar with using their imagination to express themselves. 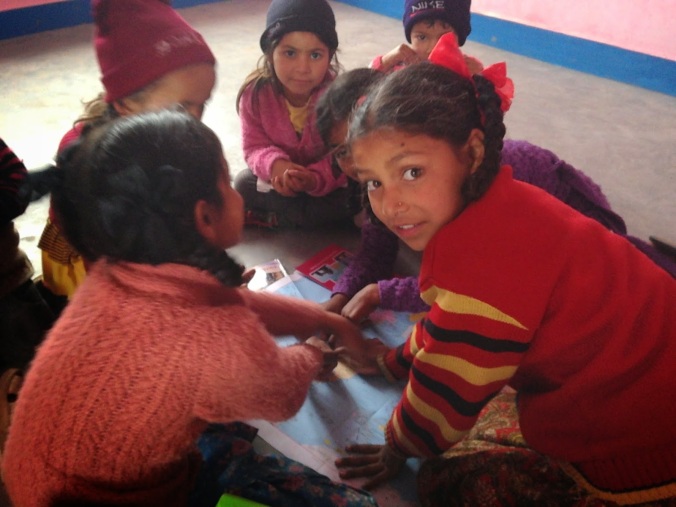 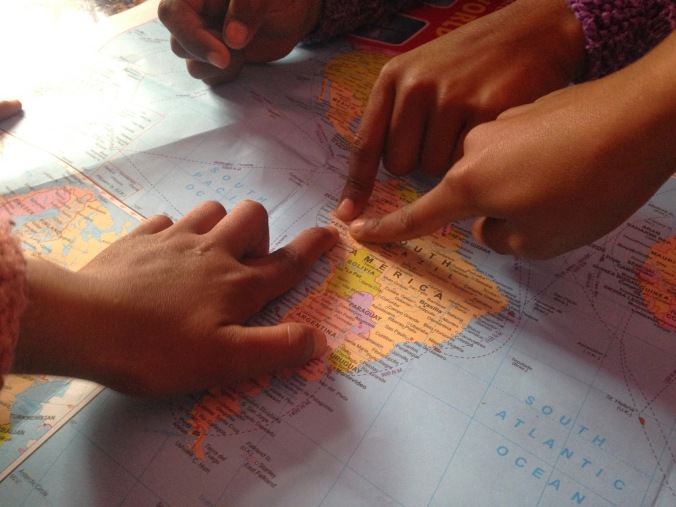 So there have been a lot of ups and downs in fun club thus far, but it gets better every week and it’s really rewarding watching the kids engage more and more every class. It’s a great feeling to be able to give them a space to be creative and I think it’s a wonderful opportunity for us interns from a variety of interest areas to interact with the next generation in this community.

Feel free to comment with any suggestions for future classes!