So, I’ve never been to Asia before. My only extensive travel experiences up to now have been in Europe and I’m quite used to figuring out countries as I go. I tend to appear in the center of some new city and, while I usually don’t know the language, I’m able to work out certain words or – at the very least – feel incredibly confident that if I need it there will be some travel office in the vicinity staffed with English-speakers.

You have certain expectations about what the center of the city will be like: old buildings, busy offices, lots of restaurants and cafes where you’ll know at least a handful of items on the menu. Within reason, wandering around central areas is safe and you don’t have to significantly alter your behaviour from country to country.

Immediately upon landing in India I could tell I was way out of my depth. I think I can safely say that I’ve never truly understood the sensation of ‘culture shock’ until that day; every single thing around me was different. Some were blatantly so and others much more subtle, but I certainly was incredibly conspicuous and extremely clueless. I suddenly realised that I had no map of the city, no money other than British pounds, no grasp on the language and no phone or internet.

Luckily what I did have was one incredible academic son (a university tradition where you ‘adopt’ a first year when you’re in your third year, and, after this trip, livelong proof for me that children are a very worthy investment). He lives just outside of Delhi and – very fortunately – was still in the country for a few more days before returning to school. Upon hearing that I was heading to India and had a whole day in Delhi before I was due to catch a bus heading north, he offered to pick me up from the airport and entertain me until it was time to deposit me at the bus station.

After a very long five minutes waiting outside the airport amongst a swarm of taxi drivers looking inquiringly in my direction, I finally saw a familiar face in the crowd and immediately anxiety gave way to post-travel exhaustion. But I didn’t have long in Delhi and wanted to see some things while I had the chance!

Our first stop was Gutb Minar. The tallest minar in India, this distinctive red spire covered in Arabic carvings stands as a symbol of an Islamic past. While this monument is the main attraction, the surrounding area is filled with various grand tombs celebrating 13th and 14th century rulers (some so unrealistically ambitious in their designs that they still stand unfinished). 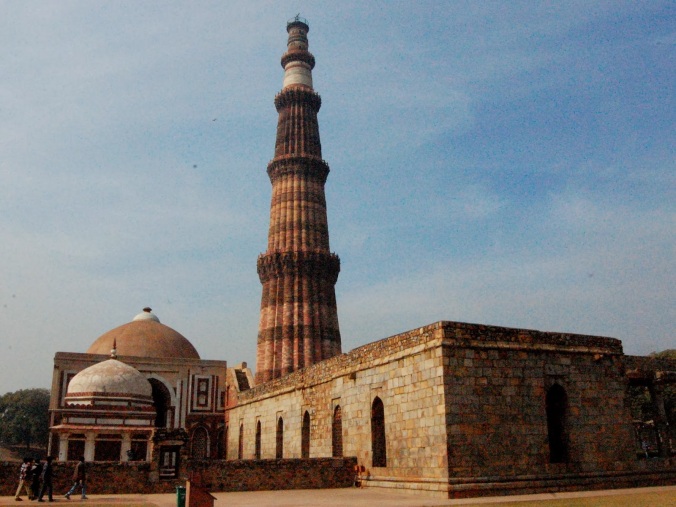 The intricate carvings were absolutely beautiful, but I have to say that I was mildly distracted by the fact that I was walking around in January overheating in a cardigan and boots and by the appearance of bright green parrots casually resting in the shade of these buildings.

I also experienced my first instance of “look, it’s a white girl! Let’s take a picture with her.” The second my Indian companion walked away, an older Indian woman shyly approached me and gestured to her camera. I thought she wanted a picture with her friends, but it turned out she wanted me to pose with her. Which I did and she was lovely about it. And then returned a few minutes later with her sister and sister-in-law who all wanted pictures as well.

Second on the list was dilli haat, an enclosed market which cost a very small amount to enter (not that I had any conception of what rupees were worth at this point) and in return the stalls were all quiet and the street food more hygienic than the average. Or so I was told – I didn’t stick around Delhi long enough to find out. I wasn’t much in the mood to actually make any purchases as I had only just arrived and had no desire to add weight to my baggage before I got to my destination. But what the sleep-deprivation and prospect of upcoming travel did not eliminate was my interest in food. I was cautious because the last thing I wanted was to be sick on a 12-hr bus ride (I had already been hoarding all the free snacks from the plane in case I couldn’t find a meal I was confident about in Delhi) but I figured all things in moderation…

So I tried goat for the first time. It’s called ‘mutton’ here and we had it in the form of sausages. Not particularly inspiring – very salty – but nice to try something new. We had a delicious paneer dish and an outrageously large order of momos (dumplings), fried and boiled.

We were running out of time to do anything significant at this point, and I was severely low on energy, so we ended up going to a bar for our remaining hours and having the national beer of India – Kingfisher – while catching up on life. We also ordered some fish kebabs which were delicious but unfortunately I don’t have photographic proof because my camera battery was confiscated on the way into the bar… Still unclear as to why; perhaps there were Indian celebrities hanging out in there with us.There was also a brief trip to a phone store to try and get a SIM card, but I was informed that I could not do so without a Delhi hotel key or address. So I was to continue without the ability to get in touch with the outside world for the next leg of our journey.

Giving ourselves what we thought was plenty of time to get to the bus station, we ended up in stand-still traffic and I got to experience Indian-driving for the first time. There are no rules and lots of honking. There are of course many places in Europe where this applies, but India proved to be a whole new level of disorganised chaos.

I don’t know what I expected from Delhi, but it isn’t what I got. I realise I only saw a very small area, and most of it from the window of a car, but I can’t say that my time there left me eager to return. Immediately upon leaving the airport, we were surrounded by small, crowded shops lining the road, all selling the same things and absolutely covered in advertisements for phone companies and Coca Cola. There was trash everywhere and animals on every street eating this trash. When crossing the road we had to literally just step into traffic and hope it would stop because there was just no other way. There was a lot going on and not in a particularly vibrant or interesting way. But as I said – this was the first impression of a weary and nervous traveler seeing only a small part of a large city. I’ll have to spend some time there before I fly out and give Delhi a second chance.