Traveling to the March.

Late morning, the group waiting for the train is small, but standing on the east-bound platform of the Princeton Junction train station with my mother and her friend Polly, it is easy to distinguish our fellow marchers from the general commuters. We are the ones holding signs and wearing statement t-shirts; they wear heels, suits, and looks of quiet resignation.

Everyone seems to fit into one of the two groups, except for one woman in her mid-twenties, standing alone and looking around eagerly – looking at us instead of the space where the train will soon be. The local paper had sent a reporter to interview people before they left town for the big event.

We are approached and asked about what had inspired us to join, and what we wanted to see result from the day. An older couple standing nearby chime in that they are attending in order to protest fracking in particular. Within the march, we are to be divided into sub-groups: the anti-corporate power groups, the anti-fracking groups, the communists, the veterans, the LGBT. Everyone else – the “freelance environmentalists” – will march together at the very back.

Finding some of the last remaining seats on the crowded train, we place our signs by our feet, trying to make them as unobtrusive as possible.  My large, green sign is already tied onto my backpack and through the journey it’s a constant chore to keep the corners out of the aisle as people walk past. I’m trying to avoid pastel rubbing off onto anyone but me.

From the lower level of this double-decker train, groups of sneakers and jeans come into sight through the window at every stop – disembodied crowds with upside-down signs hanging by their feet. In my excitement, this seems like the ultimate symbol of an anonymous movement, where individual identities are less important than the united mission of the group.

From our platform at Penn Station we all move as if we’re being carried by a tide, flowing up the stairs and towards the subway station, where we form a bloated line waiting to purchase or top-up metro cards. The out-of-towners reveal themselves by asking nervous questions, and the excitement of the crowd manifests itself in polite patience and friendly exchanges. It’s a very unusual start to a day in The Big Apple.

After purchasing our tickets from an incredibly efficient MTA employee, we wait on the subway platform in the hot humid air which reminds you that you’re underground. A train arrives, entirely full, and then departs. The next train pulls in, also apparently full, but this time we somehow manage to squeeze ourselves in.

In the subway, not only are all the seats occupied, but so is most of the space near balance-supporting poles. The rest of us reach up and press our palms against the ceiling for stability. My mother grasps onto one of my arms to steady herself, while others likewise trust those around them to prevent a fall. There’s no room for falling, anyway.

I place my backpack, complete with attached sign, between my feet, pushing my calves together in an attempt to consolidate myself and my possessions into the smallest space possible. The atmosphere around us is still devoid of the anger you might expect in this situation; almost everyone seems to be attending the march and there’s an overwhelmingly optimistic aura of mutual support.

“Well, you’ll be fine,” my mom’s friend Polly loudly assures us over the shoulder of two tall, muscular police officers, “You’ve been on a bus for 14 hours”.

“Well, only 12,” I correct, as if that made such as difference. My mother and I had traveled down the Himalayan Mountains in India on our way to Rishikesh. We spent the whole trip dozing in very roomy and comfortable seats, so I don’t feel we deserve the praise this implies – it was hardly a rough journey.

The young ginger man standing next to me looks at us, wide-eyed;

“You traveled 14 hours to get here? Where’re you coming from?”

We had all informally agreed to forgo privacy when we entered the crowded train car– this man and I had already apologized back and forth several times for bumping into one another when the car made sudden movements and we were sharing the same square foot of ceiling space. So we were basically friends.

He sounded impressed by this imaginary journey, so I quickly stumbled my way through a correction;

“No! Uh, no, we, um, we’re actually from Princeton so only an hour’s trip. That was earlier. She means our trip to India. A few months ago. Not for this.”

I finish with an awkward smile, hoping to show we hadn’t meant to deceive anyone.

Are we going to talk about India now? Should I ask where he’s from? We shuffle slightly as people get off at the next stop and more enter. The moment has passed.

No comment is passed in privacy on this journey, but none of us strangers enter into proper conversation either. Maybe because you know a dozen or more others will be listening, or maybe because it somehow feels too risky to start a conversation with a person you don’t know when neither of you can physically escape if it should fall into awkward silence.

The ginger, my mother, and I periodically share a smile of goodhearted amusement when someone stumbles, or friends begin conversing loudly as if they were sitting at a table together for lunch rather than standing in a space the size of a Starbucks restroom with 30 other people.

We all assist in conducting crowd management at each stop, carefully coordinating who needs to get out of the way, and which gaps can be filled in after the exodus.

“Adele? ADELE! This is our stop. You need to get out, Adele!” The middle-aged woman standing near the exit has been separated from her friend and projects this command over everyone’s heads as the train pulls into the station.

“Adele?” the crowd contributes to the search, each looking left and right for this mystery woman.

“Yes, yes, coming” appears a soft voice, speaking these words with a hint of anxiety and a pinch of embarrassment.

“It’s Adele!” The crowd is triumphant – giddy. An older woman, Adele is leaning against the opposite wall of the car; small and short, she’s almost vanished into the corner. Everyone in her path shifts around acrobatically to ensure she will get out in time.

Over the next three or four stops, people trickle and then pour out, depending on where they’re going in the march. Finally, those of us left reconvene, standing proudly around poles or sitting in the seats with rolled up signs resting on their laps. We savor the last few moments of personal space before our time comes to join the sea of people already convened above our heads. 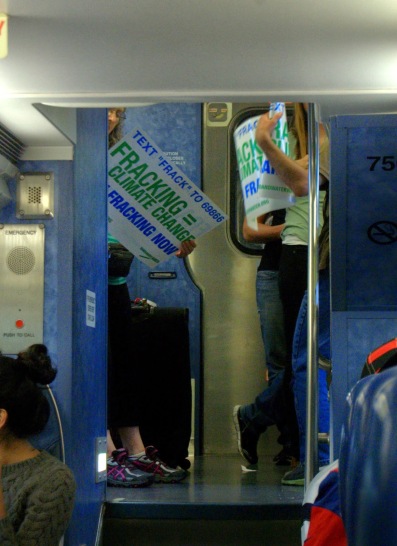 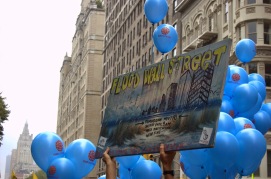 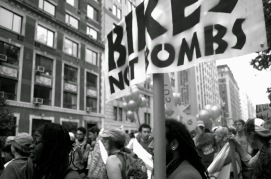 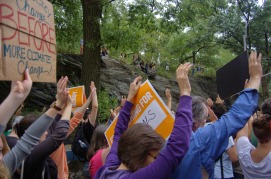 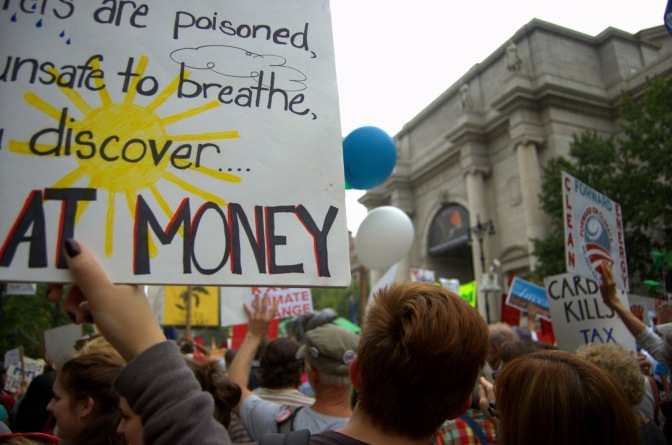